August 29, 2004 Geronimo A. T. Casper was whelped to parents Brody J and Sadie Von Blue near Damascus Virginia.
That October he hid under a kitchen table in BoCo for a few days after coming to his new home, I sent him a stuffed squeeky hedgehog as his first toy.
That Novemeber we met for the first time over Thanksgiving, spent Christmas break together, and he flew to Montana in January.
We've been rambling together ever since. Here's to a great seven years G!
Love you mo every day! 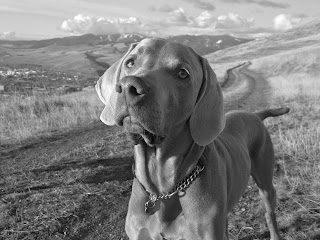 Open the windows, the sun's subsiding

Summer simmers down with cool night breezes and hurricane season bringing rain to the mountains. I'm in my new home in my old neighborhood. Excited about the new job, still snagging hours at my tried and true place of employment. Community is quiet, but steadfast - with the promise of crescendo.
I find myself with more time and space to breathe than I remembered possible. It's refreshing, and disorienting. Geronimo is transitioning well, but insatiably bored most of the time with no pup friends to pal around with. I'd be right in that boat with him if it weren't for the years of catch up I have in photo and music editing. Here's to digital media...
I haven't QUITE got inspired back to the running/ biking scene... but I feel it coming... in due time. The past few weeks have required a lot of city life tweaking, nesting, pacing, and processing. Slow and sure I'm learning to be all here.
Latest Triumphs :
My first Crock Pot prepared meal (chili, got multiple thumbs up from a few unbiased buds)
Re-introduction to grocery shopping
Tasting and Articulating Coffee nuances
Showing up to work early! score!
Multiple hostess opportunities for oasis needing friends
Getting my very tiny kayak back on the river, back in some LEGIT waves
Not driving for days in a row. Woot Woot self propelled travel!
Getting off the waiting list, into the college class I need
R O C K I N G out

I guess that's about it for now. Once I really get this photo editing under control perhaps I'll share a few images. Hope you are well and the change of seasons breathes refreshing inspiration into your life.


Posted by Rebekah at 9:36 PM No comments: Links to this post

Roughly a week ago I found myself on a surprisingly therapeutic float down the Lower New River. Among the epic surf and other awesomeness of our guide, Mike, I learned this story:
In the 1960's a little known boxer named Cassius Clay won his first professional match against Tunny Huntsinger, one of the best boxers at the time. Clay, later taking on the name Muhammed Ali, went on to be one of THE most famed boxers of all time. Huntsinger took the blow as a retirement enticement and returned to his hometown of Fayetteville, West Virginia, soon after becoming police chief for many years.
I might be botching the details of the story a little but from what I remember Ali and Huntsinger remained good friends, Ali even showed up for his police retirement celebration when the two were old men. Somewhere around that time a reporter asked Ali what the toughest match of his life was. Ali thought for awhile, before saying.... a lot of different matches in my career were tough for different reasons.... it's hard to pick just one. But I can tell you this - no boxer hit me harder than Tunny Huntsinger.

I've been thinking about the story a lot this past week. I'm working through the second consecutive seasonal transition of BIG change. Not that THAT in itself is new to my life, but it has me thinking about all the transitions and chapters that seem to come so quick these past five years. Montana to Virginia. Botetourt to Roanoke. Roanoke to nomad. Nomadding myself to Montana. Montana to Luray to pinball to..... Roanoke.
Each challenging and beautifully complicated in their own right. But if I had to choose - I don't think any has dealt a harder blow than Mountain Campus.
It amazes me - the content of a year. The ups and downs, triumphs and tribulations, the life lessons.
My time in Luray leaves me overflowing with all of that. And those lessons - their poignancy and real-ness making them equally valuable and sad.
As I sit here in a borrowed home, on the threshold of my next chapter I do not intend to dwell on the past or the in between, nor gloss over whatever pain or hurt the recent past has brought.
My hopeful prayer is to look the wound straight on-clean it and bandage it appropriately, change the dressings when needed, and someday - after it heals, be grateful for the scar stories it holds.
Those hard blows sting. I might spend a little time down for the count.... and those truths cycle through me.
perceiving then that they might take him by force he withdrew to the mountain, alone.
I will not abandon you nor leave you as orphans, I will come for you.
I praise you because I am fearfully and wonderfully made.
These three remain - faith, hope, and love. And the greatest of these is Love.

And as far as the particulars of Mountain Campus boxing matches... I'm comforted knowing I left every ounce of energy I had on the court.

Here's to fall. Ready or not.
Posted by Rebekah at 11:25 PM No comments: Links to this post